Nigeria Hub - What is safeguarding?

What do we mean by safeguarding against SEAH?

Safeguarding broadly means preventing harm to people – and the environment  – in the delivery of development and humanitarian assistance.

It is well known that aid programmes can result in unintended negative consequences to local populations. SEAH, in particular, is widely recognised and documented. The vast majority of staff and associates of aid agencies are highly committed and principled but there is always a risk that some may engage in misconduct that harms local populations, especially vulnerable groups. Similarly,  staff and associates may themselves experience harm in the workplace at the hands of their colleagues.

The Resource and Support Hub has been deliberately designed to focus on preventing and responding to SEAH as these acts constitute some of the most grave violations of those who may be most vulnerable/at risk. Rigorous safeguarding policies and practices will also serve to strengthen public confidence in the sector, and ensure the continuation of support that exists for international aid and development.

For the purposes of the Hub safeguarding means taking all reasonable steps to prevent SEAH from occurring; to protect people, especially vulnerable adults and children, from that harm; and to respond appropriately when harm does occur.[1]

The Hub uses the following international definitions for related concepts, particularly those of the UN:

SEA is defined as:

Protection from Sexual Exploitation and Abuse (PSEA) is the term used by the UN and NGO community to refer to measures taken to protect people from sexual exploitation and abuse by their own staff and associated personnel.[6]

Many aid organisations now talk about tackling SEAH as opposed to SEA, clearly adding harassment as a related issue. This arises from increasing recognition that sexual exploitation and abuse and sexual harassment have common structural roots in inequality.  Safeguarding violations can take different forms – sexual, physical, emotional, economic and verbal abuse, for example.  Although these issues have been tackled separately to some extent, all are safeguarding issues and have at their root the underlying problems of power differences, inequality – especially gender inequality – bias, privilege and discrimination based on race, ethnicity, religion, sexual orientation, disability, economic and other aspects of status and identity.

A whole organisation approach, which addresses organisational culture, is required when tackling these underlying problems in a nuanced way and ensuring that robust safeguarding policies and practices are implemented. This needs strong leadership with an emphasis on respect, dignity and inclusiveness. We hope the materials on the site will be useful in tackling SEAH and wider safeguarding issues, preventing all forms of harm through safe environments across aid and development agencies.

Nigeria, the most populous African nation with a population of 201 million (World Bank 2019)1, is a federal state with 36 states and the Federal Capital Territory (FCT). There are 521 languages with over 250 ethnic groups. The official language of Nigeria, English, was chosen to facilitate the cultural and linguistic unity of the country. Nigeria is a religiously diverse society, with Christianity and Islam being the most professed religions, with a minority of people still practising traditional African religions (Wikipedia)2. Human rights records and poverty indices of the oil-rich country remain poor. According to the US Department of State,3 the most significant human rights problems are use of excessive force by security forces, impunity of abuses, rape, torture etc.

The country is a federal system and pluralist in terms of ethnicity, region and laws. Some key legal documents that support prevention of sexual exploitation, abuse and sexual harassment (SEAH) include the Constitution, the Violence against Persons Prohibition Act, the Child Rights Act and the Sexual Harassment in Tertiary Institutions Bill. Nigeria, with a highly patriarchal system, requires deep rooted behaviour change for a cultural shift and change in power dynamics.
The country assessments are designed to provide an evidence base that can inform the design of the national hubs for the Safeguarding Resource and Support Hub (RSH). Different approaches were deployed for data gathering in the conduct of the country assessment. These include Key Informant Interviews (KII), Online survey and Desk Review. 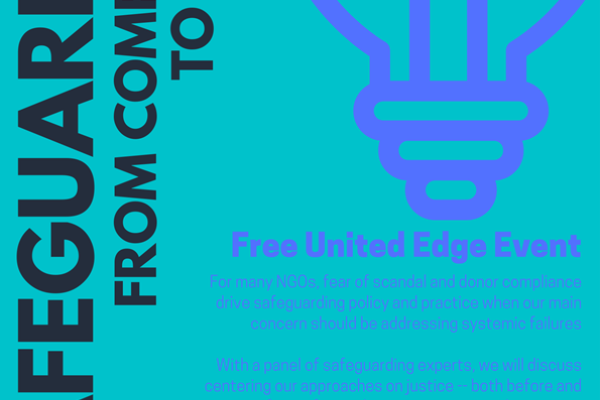 Safeguarding from compliance to justice 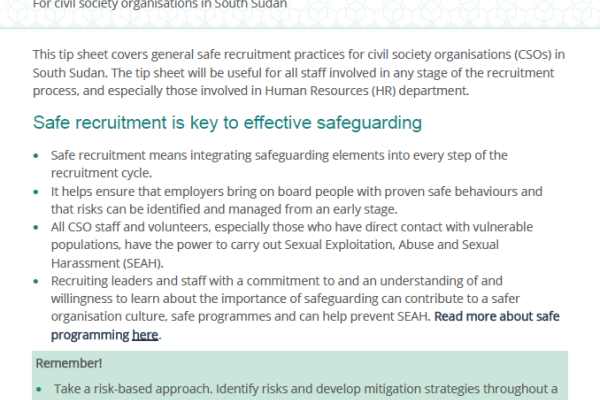 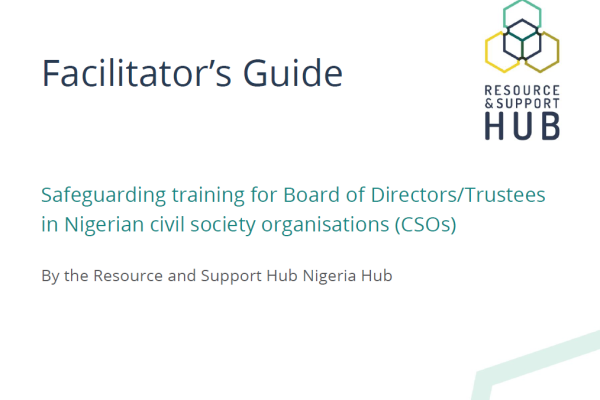 Training of Board of Trustees (BoT) package

The Training of Board of Trustees (BoT) package provides various resources. It includes presentation slides, a facilitator’s guide and a participant'…
Read more 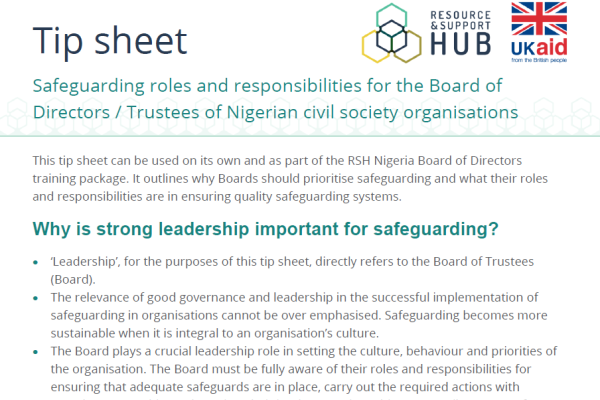 This tip sheet can be used on its own and as part of the Training of Board of Trustees (BoT) package designed by the RSH Nigeria Hub. It outlines why…
Read more 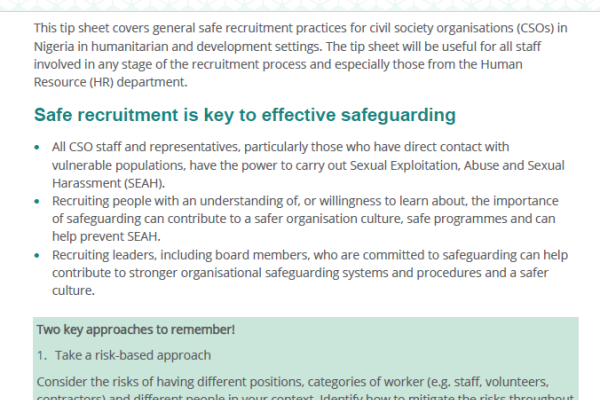 Are you looking for safeguarding experts in Nigeria and Africa? Click here to view our directory of Service Providers.

Do you want to Join RSH? Click here to get the latest news and information from the team.